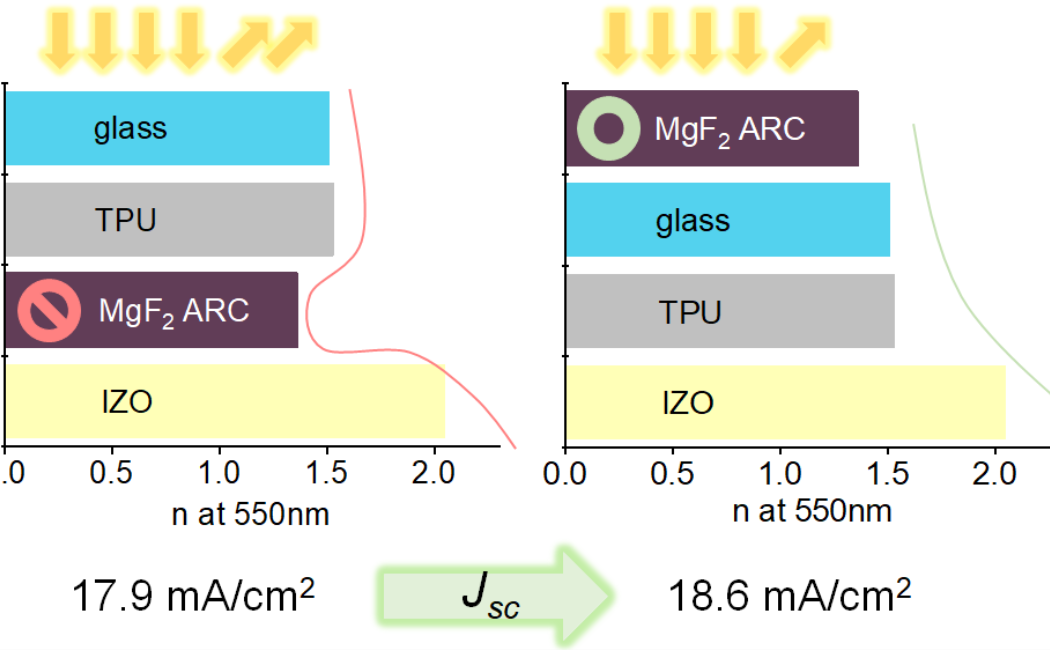 The perovskite/silicon tandem single-cell solar modules are fabricated in KPV labs by laminating the tandem cell between two glass sheets using thermoplastic polyurethane (TPU) as an encapsulant and butyl rubber as edge sealant. With this configuration, the cell-to-module power conversion efficiency (PCE) losses are as high as 3.2% absolute, reducing the PCE from 28.9% to 25.7%. This loss is mainly due to a 1.7 mA/cm2 drop in short circuit current density (Jsc) from cell (19.6 mA/cm2) to module (17.9 mA/cm2). Lujia Xu et al. infer that this Jsc loss is caused by the introduction of glass and TPU, resulting in front reflection/escape and parasitic absorption of incident light. In this study, Lujia Xu et al. reduce this front reflection loss by optical redesign of the module through refractive-index engineering.

Via optical simulation, Lujia Xu et al. find that even though the module Jsc is always lower than that of the bare cells, by simply moving of the MgF2 ARC from the cell to the top of the module front glass one already can significantly mitigate the cell-to-module Jsc loss by ~0.9 mA/cm2.

With guidance from the simulation, Lujia Xu et al. also applied the optimization in experiment. The tandem Jsc increases by 0.7 mA/cm2 (from 17.9mA/cm2 to 18.6 mA/cm2) in the new configuration, enabling a monolithic perovskite/silicon tandem module PCE increment from 25.7% to 26.2%.

This work highlights the need to investigate and account for cell-to-module losses in order to take full advantage of the high PCE potential of perovskite/silicon tandems.