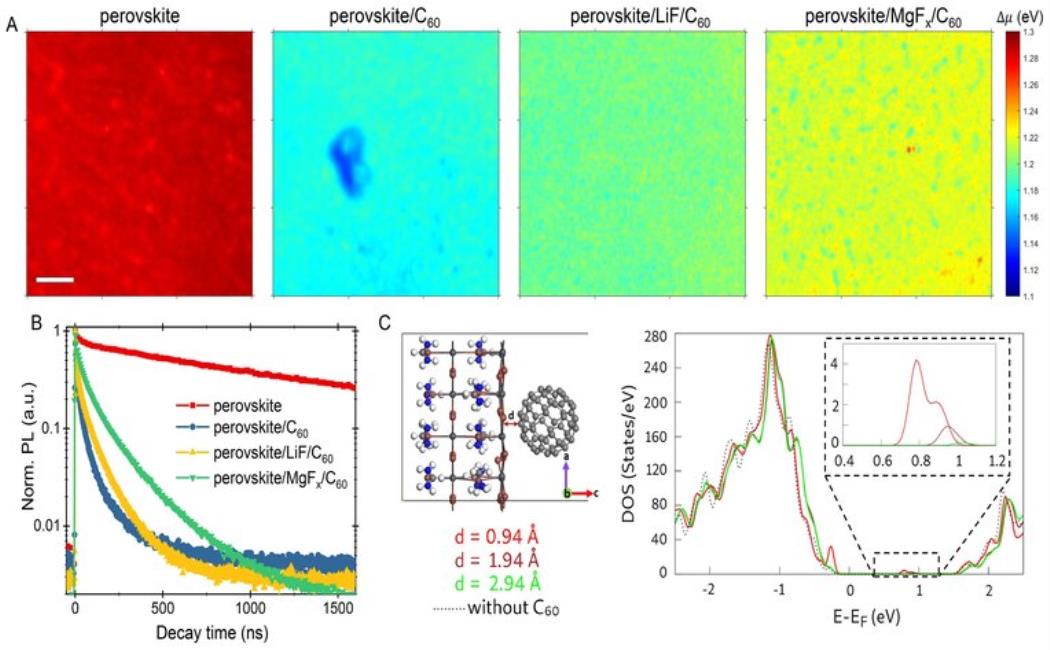 We reported an independently certified stabilized PCE of 29.3% for a monolithic perovskite-silicon tandem solar cell over ~1 square centimeter aperture area, which is one of the highest values in this community. This tandem was constructed with a micro-thick perovskite layer on a double-side textured Si heterojunction bottom cell, which can enable light trapping, and more importantly, is industrially compatible. We found that an ultrathin MgFx as the interlayer at the perovskite/C60 interface suppresses the interface recombination, and improves the Voc and FF of the devices.

Alkali-earth metal fluoride is a generic route as the interlayer.

We explored a series of metal fluoride as the interlayer through thermal evaporation. MgFx and CaFx interlayers both could lead to significant device performance improvements. This indicates that the use of alkali earth fluorides as an interlayer is a generic route to improve device performance. It is well known that alkaline-earth metal fluorides are non-hygroscopic and have extremely low water solubility, which is beneficial for the construction of more stable perovskite-based solar cells. This finding can open up a new class of alkali-earth metal fluoride as an interlayer to suppress interface passivation of perovskite/ETL interface in p-i-n configuration.

The root cause and mitigation of perovskite/C60 interface recombination

The perovskite/C60 interface displays substantial charge carrier recombination, mainly limiting the device performance. We aimed for a contact displacement between the perovskite surface and C60 layers as we results have consistently revealed that C60 introduces a gap state within the bandgap when C60 is in close contact with perovskite while displacing C60 away from the perovskite surface can suppress these issues. Our DFT calculation has provided a fundamental explanation for this.

We subjected our encapsulated tandem device to damp-heat testing (85°C with 85% relative humidity, IEC 61215:2021 standard), which is considered as one of the harshest tests for perovskite-based devices. Impressively, the MgF2-treated tandem device did not show any Voc or Jsc degradation after over 1000 hours and retained 95.4% of its initial PCE. The Voc even improved slightly, indicating that the perovskite itself and the interfacial layers are sufficiently tolerant to thermal stress.